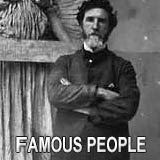 This page is a tribute to some famous New Hampshire residents or people born in New Hampshire or who have lived in the state. This northern New England state has been home to many famous people. From baseball stars to inventors, artists, and poets to politicians, New Hampshire is where the following well-known people and celebrities were born or called home. Share your famous NH people suggestions. Feature your NH business in NH Living, contact us.

Grace Metalious was born into poverty in Manchester, NH in 1924, started writing at a young age and graduated from Manchester Central High School. Grace married George Metalious in 1943 and is most well known for writing four novels; Peyton Place, Return to Peyton Place, The Tight White Collar and No Adam in Eden.

Frost is known for his poems that described the nature and daily life of New England. His home in Franconia is now a museum.
Salmon P. Chase (1808 -1873) Chase was secretary of the U.S. Treasury during the making of the first green dollar bill in 1863 and went on to become the chief justice of the U.S. Supreme Court a year later.

Alice described New Hampshire’s people and places through her short stories and plays such as “Meadow – Grass: Tales of New England Life” and “Children of Earth.”

Ken is documentary filmmaker who resided in Walpole, New Hampshire. His work includes Jazz , The West, Baseball,and The Civil War.

Bob Montana created the popular comic strip “Archie” in 1942. The comic strip was based upon his high school classmates in Manchester.

Barbara Ann Cochran (born 1951) Barbara was an Olympic gold medalist in the slalom skiing event at the 1972 Olympic Games.

Carlton Fisk (born 1947) Fisk was born in Bellows Falls, VT and grew up in Charlestown, N.H. During his first year as a starting catcher for the Boston Red Sox he was named Rookie of the Year, was elected for the American League All-Star Team, and won the A.L.’s Gold Glove Award.

Mike Flanagan (born 1951) Flanagan was brought up in Manchester, NH. He became a Cy Young Award winner and an American League leader with the Baltimore Orioles.

Elizabeth Gurley Flynn (1890 -1964) Flynn is known for her help in founding the American Civil Liberties Union, which is dedicated to protecting the rights of all Americans.

Sam Walter Foss (1858 -1911) Foss was a poet, journalist, and editor and was mostly known for his portrayal of the speech of the New Hampshire people.

Horace Greeley (1811 -1872) Horace founded and published theNew York Tribune, which was a famous newspaper during the 1800’s. He used the paper to voice his ideas on politics and other issues during that time.

Irving is a best-selling author. He attended Phillips Exeter Academy and the University of New Hampshire. His novels include The World According to Garp, A Prayer for Owen Meany, Hotel New Hampshire, and The Cider House Rules.

Dean is an inventor who holds over 150 U.S. and foreign patents, many of them in the medical field. His most popular invention is the Segway, the 2-wheel electric human transporter.

Christa was a schoolteacher in New Hampshire and was selected in 1985 by NASA to become the first civilian in space. On January 28th, 1986, just a few seconds after take-off, the space shuttle Challenger tragically exploded. Christa and the rest of the crew were killed.

Maxfield Parrish illustrated hundreds of magazines and books. His home was in Plainfield, NH. Parrish also spent time at nearby (Saint-Gaudens) in Cornish, New Hampshire which was the home of Augustus Saint Gaudens another famous artist. Saint Gaudens is said to have inspired some of his work. New Hampshire Art Galleries may be found in every region of the state and are worth a special visit.

Franklin Pierce (1804 -1869) Pierce was the 14th president of the United States. He was born in Hillsborough, New Hampshire.

Eleanor Porter (1868 -1920) A children’s author from Littleton, Porter made it big after she sold over 1 million copies of her book Pollyanna.

J.D. Salinger (born 1919) Salinger is famous for writing the novel Catcher in the Rye. He also wrote many short stories. In 1953 he moved from New York to Cornish New Hampshire.

David Souter (born 1939) Souter is an associate justice of the U.S. Supreme Court. He had served on the New Hampshire Supreme Court until he was appointed to the highest U.S. court in 1990.

Earl Tupper (1907 -1983) Tupper invented the well-known household product Tupperware in 1945. Tupperware did not become popular until the 50’s, but sales have been increasing ever since. Tupper was from Berlin, NH.

Daniel Webster (1782 – 1852) A farmer’s son, Webster graduated from Dartmouth College in 1801 and, through his later efforts as a lawyer, orator, and secretary of state, he became his era’s foremost advocate of American nationalism. Webster was born in Salisbury, NH.

Adam Sandler (born 1966 ) Born in Brooklyn, New York Sandler spent much of his childhood in Manchester, New Hampshire. Sandler was “a class clown” in the Queen City. Sandler today is a successful comedian and actor. His most well-known films include Happy Gilmore, Billy Madison, 50 First Dates, The Wedding Singer, and Big Daddy.

Chris Carpenter Carpenter graduated in 1993 from Trinity High School in Manchester, NH, where he earned Athlete-of-the-Year honors as a senior. He was selected all-state for three years in both baseball and hockey. Chris played Major League Baseball for the St. Louis Cardinals where he won the NL Cy Young Award and was the New England Player of Year in 2005. Chris, wife Alyson and family reside in the Merrimack Valley town of Bedford, NH.

Bode Miller (born 1977) Miller grew up in Easton, a village near Franconia. His family chose to live in a cabin without running water or electricity. Growing up, he excelled at tennis and soccer but found his true calling on the slopes of Cannon Mountain in Franconia State Park. Bode Miller is known for his independent spirit and unorthodox skiing style. In 2005 he was the first American in 22 years to win the overall World Cup title.

Triple H Triple H, was part of the WWE, grew up in Nashua NH. As a lean 14 year old he won a free week at a small local gym over the summer. He liked it so much that he spent nearly every day of the next three years training there. After winning many bodybuilding competitions he joined the independent wrestling circuit. From there he joined the WCW where the WWE noticed him.

Mandy Moore was born on April 10, 1984, in Nashua, NH. Moore moved to Florida when she was just a baby, and at the young age of 6 chose to pursue an entertainment career. Moore began appearing all over the state of Florida singing the National Anthem at sporting events. After landing a record deal with Sony, Moore also pursued an acting career and has appeared in several films including A Walk to Remember, The Princess Diaries and How to Deal.

Sarah Silverman A talented comedienne, writer, actress, singer & musician, Silverman was born in Bedford, NH in 1970, and is the youngest of four daughters. Silverman performed in community theater at the age of 12, starred on local Boston television programming at the age of 15, and attended the Derryfield School in Manchester.

Seth Meyers was born in Bedford, NH in 1973, and became famous as a writer of Saturday Night Live. This talented actor and comedian attended West High School in Manchester before going to college at Northwestern University in Illinois.

Scotty Lago is from Seabrook, New Hampshire and made national news when he won a Bronze Medal as a member of the 2010 US Olympic Team on February 17th of that year. Scotty began snowboarding in Amesbury, MA and has been riding since 1996.