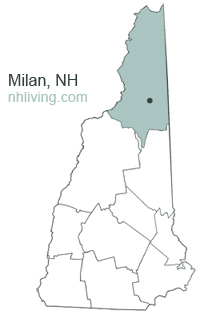 Welcome to Miland, New Hampshire. Milan, NH was first named Paulsbourg in 1771, after Paul Wentworth, the governor’s cousin. Among the first grantees were relatives of the Harris family, who had established one of the first woolen mills in America at Harrisville. In 1824, Governor Levi Woodbury, who was interested in expanding wool culture in New Hampshire, authorized naming the town in honor of Milan Harris.

“Milan is often mispronounced. The correct pronunciation is My-Lan, not Milan like the Italian city.”

Villages in Milan include; Copperville and West Milan. In the middle 1800s, there was a large vein of gold discovered in the hills, which was mined for several years. Milan is the site of the Berlin Ski Jump, Milan Hill State Park, and the Milan Fire Tower – a scenic view can be captured from this NH hike.

To share any Milan, NH information with us, please contact us. Learn more about advertising in NHLiving.