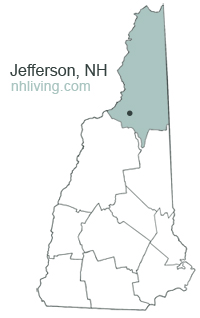 Jeffersonville, New Hampshire was first granted in 1765, the location was so deep in unexplored territory that few took up their claims. One who did was Colonel Joseph Whipple of Portsmouth, who cut trails through the forests to build a manor house. He named the town Dartmouth after William Legge, Earl of Dartmouth and patron of Dartmouth College. Brother to William Whipple, signer of the Declaration of Independence, Colonel Whipple renamed the town Jefferson in 1796, four years prior to Thomas Jefferson’s election as President. Originally there were six distinct sections of Jefferson; Riverton, Jefferson Hill, Starr King, Jefferson Highlands, The Valley, and Jefferson Meadows.
Cherry Mountain – the site of a tragic landslide – is seen in full view from throughout the town. The historic cottages in Jefferson are named in the National Park Service’s National Register of Historic Places. The collection of cottages are known as the Waumbek Cottages Historic District. The cottages are called; Onaway, Wayonda, Wydybrae, Bashaba, The Birches, and The Bungalow. The cottages are visible from US Route 2 in Jefferson. Jefferson was home to “Six Gun City” – an amusement park that is no longer in operation. Jefferson is the home of Santa’s Village – a popular NH White Mountain Attraction.

To share any Jefferson, NH information with us, please contact us. Learn more about advertising in NHLiving. 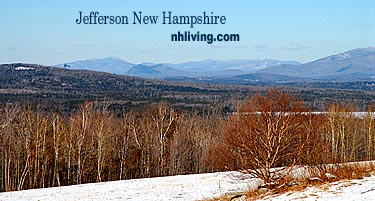