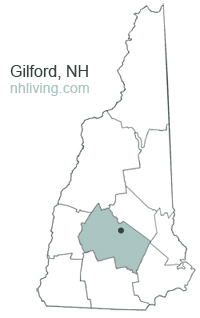 Gilford, NH was once a part of Gilmanton called Gunstock Parish, the town was named for a key battle at the end of the revolution, the Battle of Guilford Court House, North Carolina. Sargent Lemuel B. Mason, who had fought in that battle, had retired to Gunstock Parish. In 1812, he successfully proposed the incorporation of a new town to be named Gilford. North Carolina’s Guilford Court House has long since been renamed Martinsville. The original name is used by the Gunstock recreation area and ski area which is located on Belknap Mountain. Kimball’s Castle is located here, built to replicate an ancient European castle located on the Rhine River in Germany. The castle sits atop Locke’s Hill, it was constructed by 19th-century businessman Benjamin Kimball.

To share any Gilford, NH information with us, please contact us. Learn more about advertising in NHLiving.